There was a palpable excitement in the air at the inaugural Canyon de Chelly Ultra.  One hundred lucky souls had registered before it sold out in about 36 hours.  Among those gathered were Ultra winners, people who had been in magazines and films, and those destined to become part of Ultrarunning lore, but we had all come for a different reason.  We were drawn by a rare chance to run through a sacred canyon rich with history, culture, and tradition.  Canyon de Chelly, on the Navajo Reservation, has been home to many different native peoples over the last 4,000 plus years.  Each culture has left their mark – some visible, some hidden throughout the Canyon.  Many local families still call it their home, having practiced traditional ways of life for over three hundred years.  Self-guided exploration of Canyon de Chelly is limited to mesa-top viewpoints and one trail into the Canyon.  This run would offer us a glimpse of what most non-native people never get to see; we would travel past ancient ruins, spy petroglyphs and pictographs, see wild horses, and run on the same ground that has been traveled by indigenous peoples for thousands of years.

At check-in, it was as if old friends were meeting for a surprise party – one planned to celebrate a pure love of running, life-changing experiences, and the existence of the Navajo people.  Whether we knew each other or not, the rarity of such an event immediately bound us together.  We joined pieces of hushed conversation to predict what excitement the next day would hold.  The first runners to arrive were offered a bundle of Navajo tea, and on the back of the t-shirts was a Navajo saying – “H)ZH+_GO YISHWO{” which translates to “MAY YOU RUN IN BEAUTY.”  We were in for something special.

Later that evening, the RD Shaun Martin spoke about course conditions and told the story of his emotional running experience that led to the creation of the event.  Shaun’s words left us with no doubt as to the unparalleled experience he had created.  In fact, this report would be incomplete if I failed to say that Shaun himself was a big part many of us were there.  He exudes kindness, a sincere passion for trail running, and a reverence for the Earth that is comforting and empowering.  Next, Navajo Park Ranger Ravis Henry provided some education on the anthropological history of the area.  We would be running through 4,500 years of Native American history.  Lastly, we learned about the Navajo tradition of running, and its intricate link to the story of Navajo creation, from Shaun’s father-in-law, William Yazzie.  Running is vital to life, he explained – and the race through the Canyon the next day was viewed no differently.

The next morning we rose before the sun, the night’s chill still firmly within the dawning day’s grip.  At the mouth of the Canyon, the runners gathered around a bonfire.  We were offered Navajo tea, coffee and toascii (blue corn mush) for breakfast.  William Yazzie sang a Navajo song of blessing as we looked to the East – where the sun would soon peak over the rim of the Canyon.  We moved towards the start.  Shaun reminded us to yell and shout whenever we felt it; such is the Navajo way to let the spirits know of one’s presence.  He counted down from five, and we ran.  We ran as the early sun leaked rays of fire onto the massive canyon walls.  We ran past petroglyphs, wild horses, and ancient dwellings in distant alcoves.  We ran with friends old and new, and ran in solitude.  We ran through sand, mud and frigid water.  Once past the base of Spider Rock, a sacred monolith, we began the ascent of Bat Canyon – twelve hundred feet of gain in one mile of toothy trail to the mesa-top turn-around.  Shaun greeted us with a smile, and a reminder to contemplate the path we had traveled.  I turned, and for a moment was lost; I was looking back into my valley, my canyon, my home. 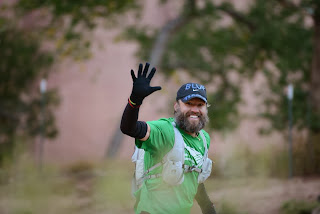 Back down the gnarly trail we pushed, moving nimbly from boulder to stone.  In the Canyon, the water crossings became a welcome respite from the warming trail.  Hours drifted by as we ran beside glowing walls of redrock, under cottonwood sentinels, and past smiling aid volunteers.  Everything felt right.

At the finish, Shaun was there to congratulate us and award each runner a family-made turquoise necklace.  Each in turn thanked him.  We refueled with veggie or mutton-stew and Navajo fry-bread.  Traditional jewelry, blankets, and moccasins were chosen by the top finishers.  The fulfilling experience was quickly over, and friends began to pack for their journey home.  Fortunately Navajos don’t really say goodbye – it is too final.  See you in the Canyon next year.

This review also appears in the Jan/Feb 2014 issue of Ultrarunning with minor modifications.
Posted by Gregg at Tuesday, January 14, 2014